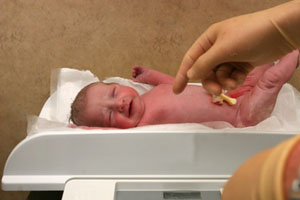 We moved from Bordeaux to a small village in the north of France between Caen and Bayeux last week. This means I must now decide on a new maternity hospital for giving birth in France. There are three possible hospitals to select from: Centre Hospitalier de Bayeaux, CHR Georges Clemenceau and Polyclinique du Parc.

Yesterday, we visited the Centre Hospitalier de Bayeaux and CHR in Caen. I think we have ruled out Polyclinique du Parc since we feel a little uneasy about this private hospital. Since private hospitals are in it for the money, other doctors have warned us against them in general since they tend to add things to the bill that were not needed. Probably a lot like in the USA, haha.

Centre Hospitalier de Bayeaux had a very typical setup for giving birth, but it does feature a birthing ball and birthing chair. We were escorted around by a very personable sage-femme (midwife) who told us that they are very sensitive to the needs of mothers who want to experience a natural birth. They allow the baby to be with the mother for up to a 1.5 hrs after delivery and wait for the cord to stop beating before cutting. Only in the case of an emergency will they do an intervention, which of course, is standard at all the hospitals in France.

What I like most about this hospital is that it is very small and intimate. After giving birth, you are to stay at the hospital for 4 days – so I like the fact that the midwives were nice, accomodating and nearby in case I was to need something. They have about 700 births there a year, so that averages to 2 or less babies a day. So when I come in to give birth, my birthing plan may actually get read and I will get more personalized attention.

A disadvantage of this hospital is that it is a level 1 hospital, which means that it is equipped for births and taking care of any emergency that may arise, but cannot accomodate the baby on the long-term. If the baby needs medicalized care after birth, they will get the baby stable but have to send her to CHR in Caen. However, the baby will not be at any disadvantage of being at this hospital at the time of an emergency, it is just the longterm care that they are not equipped.

This hospital is huge but we were able to find the maternity area without any problems. The receptionist was a bit rude and told us we must set an appointment with a sage-femme in order to view anything, which could be weeks. She had a bit of a sour attitude, but let us go walk to another section to talk to someone further since we really wanted to get in that day. We found a sage-femme in the hallway and asked him if there is someone available that could speak with us. He left and returned to tell us that he would be able to. While he was nice, he is not someone I would have liked to have around me before or after giving birth – just not very personable and any questions to him may have made me feel like I was an inconvenience.

The hospital is big, clean and new – the maternity wing was just built a year ago. When you first arrive to this section you will be almost blinded by a large neon pink room. They then use neon bright colors as accents throughout – not very relaxing. There are only 2 natural birthing rooms, of which one was in use when we arrived. It features a tub, bed and birthing ball. However, the bed looked like it was made of a plastic material and not comfortable at all. I understand it is probably easier to clean, but I cannot imagine getting comfortable enough on that to give birth. The tub was as expected, but was in middle of the room to the side without any feeling of intimacy. In fact, the room was very spacious with a large open window facing outside – making you feel like your every move is being watched. Maybe at the time of birth you will not notice, but I could not image stripping down to get in the tub with that huge window there.

What I like most about this hospital is that the equipment seems a little newer than in Bayeaux and they can handle the baby on the long-term without her having to be transferred elsewhere. This hospital is a level 3. The safe-femme told us that they have some equipment that can detect problems better than the hospital in Bayeaux.

What I disliked the most is that the atmosphere was not very welcoming, from the design to the people we met and saw. I feel like I would be another number there. I also think that my chance of using the natural room would be limited since they handle 3,000 births per year (averaging 20 per day) with only 2 of those rooms and they will not let you use this room if there is a remote sign of a complication. Since they have a special machine to detect, I think that it actually is more of a disadvantage to the woman than an advantage. Even a small hint of a potential problem would lead to hospital intervention since they do not want to be responsible if anything should happen.

While I like the idea of giving birth in Caen because my husband’s family is there and he was born at CHR, I am favoring the Centre Hospitalier de Bayeaux. The idea of using a birthing tub sounds cool, but I really do not think there will be a good chance they will let me use it or that it will even be available. Since I will be at the hospital for 4 days after giving birth I would prefer to be somewhere that I feel more comfortable and with people that will provide me with more personal attention. Since my French is not very good, I will need sage-femmes that are patient with me when I am trying to ask a question or for assistance with something. I like that when I mentioned natural birth to the sage-femme, her eyes lit up and she went right ahead to discuss all that they would do for me. When I mentioned having a natural birth to the sage-femme at CHR, he seemed to brush it off and not say anything.

While I believe that CHR is a good hospital overall and I would have a safe delivery there – my husband’s cousin had a baby there several years ago – I just do not think it is right for me. So we will make an appointment at the Centre Hospitalier de Bayeaux for my next prenatal appointment (I am overdo now because of the move). I like the idea of having the rest of my prenatal appointments at this hospital because I will be meeting with different sage-femmes. At the time of my delivery, I will be assigned 2 of their 8 sage-femmes – so by then I should have met at least one of them beforehand. In France, the sage-femmes deliver your baby unless there is a complication. At that point, I will see the attending OB/GYN.

Baby as Fragile as Butterfly Wings – A Famil...
What to Expect if Having a Baby Prematurely in Fra...
What to Bring to the Hospital When Giving Birth in...
Giving Birth in France – My Birth Story