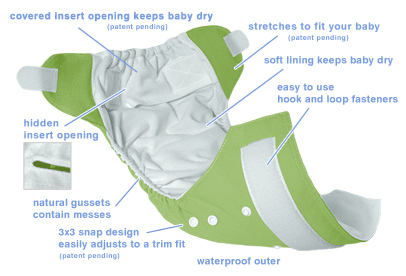 We decided that instead of using disposable diapers, we use cloth diapers (couches lavable) for our little girl. Not only will this cut costs significantly, but it will be a more comfortable solution for her and is better for the environment.

I am not talking about the cloth from the days of our parents and grandparents with the safety pins, but the modern diapers that are easy and more effective. The ones I wanted (and ended up choosing) fits babies at any age – from newborn to toddlers. This way I do not have to worry about having x amount in each size. The hardest part about going cloth in France is finding information about which diapers are the best.

After significant researching online, most information I found came from USA websites, blogs and forums. Bumgenious diapers seemed to be the most popular, with consistent positive reviews, so I decided that this will be my brand. Bumgenius will be less risky since I was able to read hundreds of testimonials, reviews and advice. But now I am stuck with only being able to buy Bumgenius from a company in France, as companies outside of France are not allowed to ship diapers out of its country. So if I find a great deal in the USA (which I did!) they are not allowed to ship any over to me.

The websites where I found the best deals for Bumgenius are:

Some popular sites in France for cloth diapers are:

Tim Tam Nature is having a 20% off sale, free shipping for orders over 65 euros and offers first time customers a 5% discount, so yesterday I decided to place my order now instead of waiting. I saved about 75 euros by going through them. I placed my order yesterday (Thursday) and the e-mail said that they will be arriving on Tuesday or Wednesday, which is not bad! I will post photos when they arrive.

The hardest part after figuring out which brand I would use was trying to figure out which diaper system to buy. Bumgenius offers Bumgenius v4, Organic and Flip. I did not even consider their Econobum and Newborn diapers, since I came across too many reviews that they are a waste of money. The econobums are too cheap and leak frequently and newborns outgrow the other diapers too fast to be cost effective. There are so many advantages and disadvantages of each system that it would not be smart to not invest in just one system. It appears that one diaper is better than other for different situations, and even when different people must change.

Here is a brief summary of what I found:

The Flip offers parents the ability to change only the insert inside instead of the entire diaper each time. If pee gets onto the outer shell, it can be rinsed off and reused with a clean insert. If there is a poop explosion, well, you will have to change the entire diaper. The average shell can be used for 2 to 3 changes before the entire diaper needs to be cleaned. It is available in organic cotton or sudecloth with a choice of velcro or snaps. There is a flap in the front and back that flips over the ends of the inserts to hold the insert in place.

Advantages: Less laundry since you are mostly changing inserts throughout the day instead of the entire diaper. You can choose between inserts of different absorbancies or disposible. The disposible ones are handy for trips since you do not have to carry as many dirty diapers around. Just throw out the disposible insert, wipe the shell and replace with a clean one. The flaps allow inserting the inserts to be fast and easy – no need for stuffing.

Disadvantages: I read a lot of complaints from parents that it can be difficult for the insert to stay in position when putting the diaper on the baby. If it slides, then the diaper will end up leaking. When leaving the baby with daycare or a sitter, it is sometimes confusing for them.

Advantages: The suedecloth material keeps the baby dry and is more effective that microfiber, as well as lasts longer. Not many reports of leaks or rashes, so it seems to be an effective model.

Disadvantages: You have to stuff the diaper with the insert through a slot, which can get annoying. Some mothers advise that they pre-stuff the diapers after washing so that they will be ready to use when needed. Also, even though it is rare, some kids are allergic to this material.

This system had the most positive reviews of all the systems offered by Bumgenius. It is an all-in-one (AIO) so there is no need to worry about inserts. In fact, it has a few layers of inserts sewn right in.

Advantages: Babies do not have an allergic reaction to the materials. I have read many testimonials that it can hold the messiest of explosions and is very absorbant. Many women have cited that it is their favorite diaper for evenings or taking long car tirips since the baby stays dry and there are no worries about leaks.

Disadvantages: The diaper takes a long time to dry. Since this diaper is extra absorbent, it really holds in the water after it goes through the wash.  Some mothers unstitch one side of the sewn-in insert so that it can lie out separately, decreasing the drying time. Since we do not have a dryer in the house, it is something that I had to consider when making my purchase. A longer drying time means having to buy more, while the Flips are much cheaper.

Making a Decision on Which Cloth Diapers to Buy

After weighing the advantages and disadvantages of each type of washable diaper, I came purchased the following:

I then purchased 4 organic Bumgenius AIO diapers and was very tempted to purchase more of them. However, I thought 4 will give me a good feel of if they are as good as all the reviewers said. While it is not enough to last even I day, since she may need to be changed around 8-10 times a day in the beginning, this would at least give me diapers to rely on at bedtime, plus daytrips when an explosion could be embarrassing. After testing these out, I may go ahead and get some more. I also read that these are popular with the men and babysitters since they do not have to worry about adding inserts. Just put them on and go… like a disposable.

The last two diapers I added to my shopping cart were the Bumgenius v4. I was almost not going to get any because of the suedecloth, but that allergy is so rare that I thought I would take a chance. Some mothers really swear by this diaper and love them more than the others. Buying two is not a huge investment and if I like them, I could always get more later. At least 2 will give me a good idea if I prefer this one over the other.

In all, I have enough to last 18 diaper changes. This means I should have enough for the day while one set is washing/drying and another set are on standby (if she does use the average of 9 diapers a day). If this proves not to be enough, we have disposables from our baby shower that can fill in the gaps until placing an order. I would rather be a little short than to invest in a ton of diapers that I end up really hating. I found that most people recommend having at least 24, so over the next months after she is born we may have to get about 9 more.

On the conservative side, parents spend on overage between 2,600 to 3,400 euros on diapers until the child is potty trained. I just spent 245 euros, but may spend up to 300 euros on diapers if I find that 18 is not enough. We may use a little more energy and water since we really have to do laundry 2 – 3 times per week, but that cost is nothing in comparison to those experienced by parents using disposible.

The diapers are also under warranty for their first year, of which I heard of nothing but positive reviews of their customer service. They will replace the diaper if the snaps break, velcro stops working, holes start appearing, etc. They really stand behind their products, which is reassuring when making such an investment.