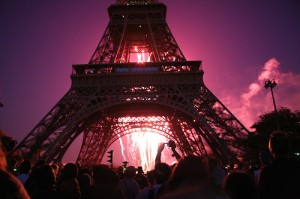 Bastille Day is a national holiday in France, celebrating the day the public rose against the monarchy in 1789. Often compared to Independence Day in the USA, I find that it is actually much different – except for the fireworks in the evening.

France did not gain independence from the monarchy on this day, but it was a turning point in the French Revolution that lead to overthrowing the monarchy and creating a representative government.

On July 14, 1789, the people stormed the Bastille during the French Revolution. The Bastille is a famous French prison that was known to hold those opposing the monarchy, and guns and weapons. When they stormed the Bastille, they only found 7 nonpolitical prisoners, but a large stash of weapons.

King Louis XVI and his queen, Marie Antoinette were in power at this time. While the nation starved, they feasted with rich acquaintances and lived a lavish lifestyle. Criticizing the monarchy meant being thrown into the Bastille, like the great writer Voltaire. Hundreds of people died after they took over the Bastille and took down the monarchy. For those of you versed in your French history, the royals were beheaded by guillotine in 1793. This ended the Reign of Terror, allowing the government to take over.

In my small village of Lantheuil, our mairie (mayor) invited all of us over for an “apéritif republican” and picnic in the garden behind his office around 11:30am. It is a bit early to drink, but since it is in the name of France… pourquoi pas? Since I am pregnant, I will have to skip out this year on the apéritif. In the evening, we will go the beach to watch fireworks over the water.

One large difference between the USA and France is that in general you will not see the French flag everywhere, hear patriotic music on the radio or see much celebration. Bastille Day is more low-key and less commercialized. Since it is a day off work, families typically will spend the day together. They may throw a barbeque, go on a picnic or wait until evening to see the local fireworks. However, it is not uncommon for families to treat it as any other day – especially if living outside of Paris.

10am – Military parade on Champs-Elysées. This year they will be paying tribute to France’s overseas territories by including regiments from Guadeloupe, French Guiana, Martinique, Réunion, Mayotte, New Caledonia and Polynesia.

11pm – Fireworks will be launched with the theme “Great Musicals” from the Trocadéro.

Remember When French Children Were Saints?
Why Baby Showers in France are Not Popular
A French Song for Mothers – Happy MotherR...
What is a Baby Shower? In France, Women Go Without...