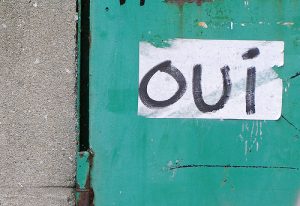 This week I finally went to the doctor without my husband! This was a huge accomplishment since I usually drag him everywhere as my personal translator. But not this time. I went alone and spoke to the doctor only in French. I understood everything he said, and even better, he understood me.

But I know I did not communicate perfectly, so I must finally put into action the tips I have received for learning French in France (below).

When I moved to France I thought I would be nearly fluent in French within a year. I am nowhere near fluent. I got lazier over time. My books are collecting dust and the audio series has long been removed from my iPod. I have movies in French that I no longer watch and music that I have not listened to in months. I could practice with my husband, but after a few sentences we always revert back to English. It is just easier. When we go somewhere, he is the one that talks while I stand behind his shoulder.

I want to become fully integrated here and have not put in the best effort of learning the language. I know enough to get by and can have a very casual conversation. But I want to move past casual conversations and have deep talks with family and acquaintances. I am tired of talking about the weather and other light topics.

I probably spent more time in researching tips for learning French in France quickly than in doing what was advised. Now is the time I must really focus, learn and practice. No more excuses or delays.

Tips for Learning French in France

When I was first learning French, I invested heavily in different books and workbooks. I rarely touched them. Living in France, you do not need to have a large book collection to learn French. Instead, I found that people learn the most from following these tips:

Do you know of any more tips to add to the list? Let me know below…