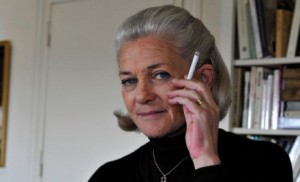 I never thought that by deciding to breastfeed, use cloth diapers and opt for organic food would be putting women in France in jeopardy of losing the progress they have made in women’s rights.

, Elisabeth Badinter attacks politicians, breastfeeding advocates and psychologist for turning French women into slaves. She further asserts that women do not need to bow down to nature. She thinks that breastfeeding and using cloth diapers is a type of bondage that forces them to spend more time with their children at the expense of their personal freedom.

“Between the protection of trees and the liberty of women, my choice is clear,” she says. “It may seem derisory but powdered milk, jars of baby food and disposable nappies were all stages in the liberation of women.”

Published in the New York times, Badinter continues that “the “green” mother is pushed to give birth at home, to refuse an epidural as the reflection of “a degenerated industrial civilization” that would deprive her of “an irreplaceable experience,” to breast-feed for both ethological and environmental reasons (plastic baby bottles) and to use washable rather than disposable diapers — in other words, to discard the inventions “that have liberated women.”

Badinter believes this movement began in the 1970s after the government began offering women paid maternity leave, then it worsened as the green movement took root. Women receive 16 paid weeks of maternity leave, or more if having multiple infants or complications. She claims that the green movement is causing women to feel guilty about their decisions to bottle feed and send their kids early to crèche (nursery) so that they can return to work.

About 50% of women in France breastfeed their children upon leaving the hospital, while rarely does a women breastfeed past 6 months. Most women stop breastfeeding around the 4-month mark when they re-enter the workforce. It is uncommon for employers in France to be accommodating to mothers who want to continue breastfeeding after returning from maternity leave.

Badinter told Le Journal du Dimanche that if we don’t watch out, we can say goodbye to women’s freedom of choice and to the struggle for sexual equality. She adds that women are still paid 20% less than men, are battered by unemployment and are the first victims of involuntary part-time.

As quoted in Telegraph, the head of France’s Green party, Cécile Duflot states that Badinter “… has completely missed the point. The real issue is to find out why today there is still inequality between men and women on pay and domestic chores, not to consider that today having a child is a problem.” I actually think that women should be more free to breastfeed by employers being more accomodating to their needs – at least, reasonably.

I agree with Duflot and think that Elisabeth Badinter is fighting on the wrong battlefield. Whether a women breastfeeds or not is her own private affair. It should not affect women’s rights, such as equal pay and benefits in the workplace, as well as with domestic chores. Deciding to breastfeed or use cloth diapers is not slavery to those that decide to do it. Plus it will not kill men to throw a couple extra loads of laundry in the wash to help out – even if my French husband seems to think so.

These women made a decision that is best for them and their families. I have decided to breastfeed and do not consider it as an invasion of my personal freedoms. I am actually looking forward of this bonding time with my daughter. My mother and older sister also breastfed and enjoyed this aspect of being a mother.

Any women, no matter her decisions about going green or returning to work should have the right to make their decisions in peace and not have to struggle for sexual equality – whether it is within the office or home. The fight should not be against the green movement, but against the social norms and politics that are keeping women firmly under a thick glass ceiling and with unequal pay.

But of course, that is my American take on the situation… lets see what actions the French mammas take in the future.

What do you think? Is the green movement hurting women’s rights?