After writing my latest post about why baby showers are not popular, I looked over at my collection of baby things and realized how much I have received throughout my pregnancy.

Since moving to Normandy, family and friends have been continuously been giving us more and more with each visit. I think we have only purchased about 4 or 5 outfits for our little girl and somehow we are loaded with enough until she is over 6 months old. My husband’s sister and mother also gave me a bunch of maternity clothes!

Since baby showers are not common in France, there is not a special day where you are given a bunch of baby supplies. Instead, you receive little by little throughout your pregnancy. These gifts are generally provided by others who have recently had a child. They give you all of their excess baby stuff or things they no longer need. Even though these baby clothes are technically used, they are in terrific condition! Probably due to the fact that babies grow faster than their ability to wear-out any one outfit.

A friend of my husband’s father gave us about 3 large bags full of baby clothes that were all either brand new or slightly used – her baby grew so fast that she did not get a chance to use most of the outfits she received! This just barely exceeds the amount we received from his cousin and mother. Oh, and his mother’s friend who knitted us a bunch of things. I have been washing and folding baby clothes nonstop for months! I decided to wash the clothes received since most of them were stored for a long time.

The clothes we were given range from simple bodies to adorable dresses. We even have a little pink Adidas jogging outfit for when she is between 3 to 6 months old. We were also given a diaper bag, baby slings and toys. Plus, enough bibs and pacifiers to last a lifetime! And just now as I am writing this post, my mother-in-law stopped by for a couple minutes to give us a cute purple Minnie Mouse dress outfit that she stumbled upon.

Another tradition in France is for friends and family to provide new parents with gifts right after giving birth. These gifts are more typical of what you would see at an American baby shower – such as supplies and new clothes. However, it is definitely not commercialized liked in the US.

I am now 37.5 weeks pregnant so I better start clearing room around here soon to store more baby stuff! I think we are going to have the same problem as the friend of my husband’s father… too much clothes for such a small amount of time. We are definitely getting showered on the French way!

And then we are heading to the US in November to introduce her to my side of family. Even though my mother and sister flew here and threw me a little surprise baby shower… we will be hit with round #2 of gifts! Our little girl is going to be spoiled! 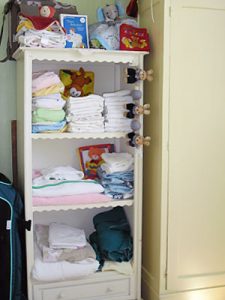 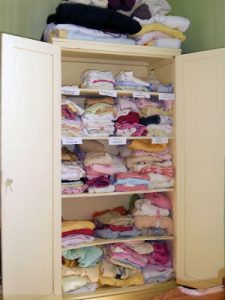 Teach Your French Boys How to Clean, S’il Vo...
What is a Baby Shower? In France, Women Go Without...
Why Baby Showers in France are Not Popular
Another Reason to Love Baguettes