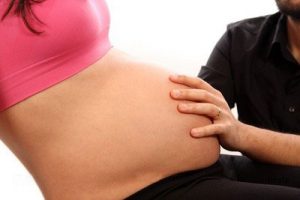 This past Thursday was our first cours de préparation pour naissance (birth preparation course) with a sage femme (midwife). It was actually the second class out of four, but we missed the first class due to confusion of its location. We thought it would be at the hospital in the same room as the cours de préparation with the puéricultrice, but apparently, it was at a location about 3 minutes away from the hospital.

We ended up having the same sage-femme as I had for my first monthly appointment at this hospital in June. She remembered me, so she spoke very clearly and slow throughout the class. I felt a little embarrassed as she kept stopping to check with me that I understood. I thought the other women would get annoyed but they were very sweet and patient. There were 6 other women in the class, so it was small group.

My husband came with me, but he ended up not having to translate much for me. The first hour we went over the different stages of labor. She discussed with us when is the right time to head to the hospital and what to expect throughout the delivery process.  She had a baby doll and fake pelvis model to illustrate the different positions the baby could come out. She also talked about the different pain relievers this hospital offers, such as having an epidural, shot or gas.

The biggest surprise for me was how she seemed really to be pushing the class to choose an epidural. She kept saying how an epidural equals comfort. The sage-femme wanted to get through to us that it is not necessary for us to choose to go through the pain when an epidural is safe and effective. She even demonstrated where the needle would go.

It was interesting to know that only about 50 percent of women who go to this hospital elect for an epidural. The sage-femme said that most women who choose not to have an epidural do so for their second child after having an epidural for their first child. I am planning on a natural birth without an epidural, so I was a little annoyed on how pushy she was.

The second part of the class was for breathing and relaxing. My husband stayed for the first half while we practiced breathing while sitting, but he left on the second half when we had to lay on a mat for visualization. I guess he was not enjoying trying to imagine his cervix opening like a flower!

I understood most of the first half while we were sitting, but I was completely lost when we were lying down. She began with us imagining we were on a beach… after that, not so sure. And since it was a visualization for relaxation, it was not a good time to ask her questions.

Our next class is this upcoming Thursday. We will be meeting at the hospital inside one of the delivery rooms. We are to review different positions for giving birth – so this will be interesting!