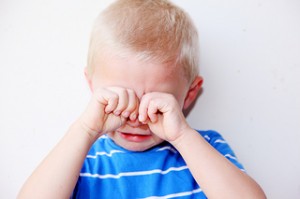 My husband informed me that someone we know just found out that her nounou (babysitter) smacked her son. She came home and found a red scratch across his forehead and other on his arm. She she asked her 2.5 year old son what happened, and he told her that the nounou hit him because he would not go to sleep.

This must be every parents’ nightmare when leaving their innocent child with someone. Now my husband understands why I am not comfortable leaving our daughter to anyone until she is a little older, after she has hit a few more milestones. At least her child was old enough to tell her what happened. If a nounou was to hit my eight month old, we would never know. I am lucky to have the choice.

The woman we know is a native of France (I want to keep her identity private because this is too sensitive of a subject) and is stuck in a very difficult situation. She moved to a small village that does not have a crèche and this nounou is the only person available. She just started a business and has a lot of time and money invested in it, so it is not like she can easily quit and return home. Her family lives over two hours away, so it is not easy for her relatives to help.

I witnessed a mother yesterday at the grocery store punishing her son because he was playing too rough with a little girl. She yelled at him and lightly hit him in public, he cried, and she carried him over her shoulder. He tried hiding his head in shame while sobbing and rubbing his eyes. I felt horrible and Juliana stared, trying to make sense of why this little boy was crying. I would not punish my child like that, but who am I to say how others raise their children. It was this mother’s choice to discipline her son physically. The woman we know, it was not her choice – a stranger made the call because her son would not take a nap when she wanted him to. This is what really angers me.

I have heard the woman I know discipline her son. She is verbally firm with him. Never would she hit him, especially so badly that it would leave marks on him. Her son is not a trouble maker, most of the time I have seen him, he is playing quietly with his toys and showing me his truck collection. He is such a good little boy, but yes, he has always been stubborn when it comes time for taking a nap. But that is where a nounou would have to be patient.

If you were in this situation, what would you do? And what actions can you take against a nounou that hit your child? I am sure that this is not her first offense and she should be penalized before doing this again.

My husband regrets telling me about this because now I will be even more hesitant to leaving Juliana with someone. I know this is an isolated case and there are many wonderful nounous in France. It is only that I would not want to take the risk unless really necessary, and only after receiving some names and numbers of other client to get their thoughts.