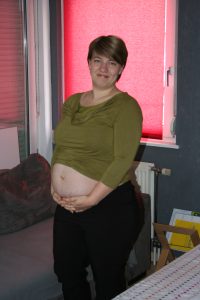 Annie’s Responses to my Questionnaire:

Here is my story. I am glad to share it to encourage other moms to follow their dreams. Birthing is not always the way we want it but other options exist in order to have a more respectful birth (for some it might mean getting an epidural when they ask for it and for others it means being medicine free for example).

1. Tell me a little about yourself.

My name is Annie F.. I’m 32 years old. I was born in France. Both my parents are American and were working in France at the time. I grew up as an American since my parents expected to bring us back to the US before our teens – I have a brother and sister. That did not happen. They returned when I was 21 and I followed. After 9 months, I returned to France and decided I might be a bit more French now than American. I can back for “love” reasons and got married to a French man a year later. I started my career out as a tour guide for American agencies but after a few years became an engineer assistant. I just got hired as an assistant in the cryogenic industry.

2. Where did you choose to give birth in France?

For my son, we lived in Correze which is known as the most rural section of France. I did not have any options for giving birth. The closest hospital was 45 minutes away. I accepted the idea.. I visited the hospital and saw quite a few things that I liked: Jaccuzi, single rooms, natural birthing instructions… and it turned out great! For my second, a daughter, we had moved to eastern France – back to civilization! Hospital options were numerous – 6 options within half an hour but none as welcoming as my first experience. I started looking and found a German mid-wife who was willing to cross the border for this second birth.

3. Why did you decide to give birth in this location?

I decided to have a home birth to give my daughter the same kind of birth as I gave my son (natural and calm).

4. What were you doing when you began labor?

I was doing the whole nesting thing and a friend had been helping me for two weeks to cross the things off my list and that evening – on the 6th – I wrote off the last thing. Friends were sleeping over and I decided to go to bed just in case it was that night. 20 minutes later contractions started. I stayed calm till 2am and then asked my husband to “kick” the friends out (who knew it might happen and for whom we had another option) and called the midwife… 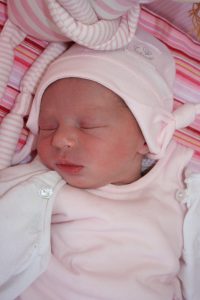 5. Tell us about your experience giving birth in France?

I called the mid-wife at two in the morning. Contractions every 20 minutes but my waters had not broke yet. Not sure I should have called then – I felt quite guilty waking her up.

At 2:50 am, G arrives. The pain was almost constant by then. I felt like I was struck by thunder which was quite different from what I had with my son with whom I had had time to accept the pain. It was hard. My husband was busy getting the swimming pool ready with body temperature water. When the midwife arrived, I just opened the door and ran back to the couch.  I could not even talk. I just managed to tell her that my waters were not broken. She put me in the swimming pool. The water felt great. The mid-wife decided to check to see “the opening” and told me I was ready. A new contraction came and I asked my husband to pray and the mid-wife naturally stepped back and gave room for my husband to help out. Next contraction, my daughter’s head came out. The mid-wife told me to hold the head and wait for the next contraction. Baby came out the next minute. So intense but so fast… Alicia was born at 3:15am on the 7th of June which happened to be “mother’s day”.

After checking on me for three hours, the mid-wife brought me to my room and put me in bed with the baby next to me… It felt so good to be in my own room.

6. What was your most memorable moment?

When she came out and the waters broke (at last) – I knew that it was all worth it!

7. Is there anything you would do differently if having another baby in France?

It seems my next baby will not be as lucky. The mid-wife moved and it appears I do not have any other options close enough. A natural birthing room has since been added to the maternity ward. I expected my sister-in-law to test it for me but she gave birth in the car as they were driving there…

8. How was your experience different than giving birth in your home country (if you are a foreigner)?

Of course, I’ve only given birth in France so it is hard to give an opinion. I do know that I would have chosen a birthing center since it is the best option for the kind of birth I want. Birthing centers were declared illegal in France and the few that existed had to close but I do believe progress is on its way.