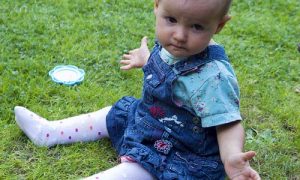 An old not-so-cherished tradition in France was naming children after saints on the Roman Catholic calendar.

Calenders were often (and still to this day) printed with a saint for each day of the year. Until 1966, parents could only name their children one of those names. This is why you see so many people in history named Jacques, Jean, Michel, Pierre, Jean-Baptiste, Marie, Jeanne, Marguerite, Françoise and Élisabeth. Of course, parents could get creative and combine names, such as Jean-Paul. In some cases, children could be named after famous historical French men or women.

The government allowed parents to give their children mythological, regional or foreign names in 1966 (great for us expats).  Then in 1993, parents were finally able to name their children freely as they wished, unless the name was considered to be detrimental to the child’s future. The government did not say anything when we chose the name Juliana for our daughter. Otherwise, her name would probably be Elisée or Claire if we had to choose from the list below.

It makes sense to name your child after such a distinguished role model. I doubt most children who are named after saints know much about that saint, but it is still a nice thought. Juliana’s middle names are the first names of my mother and my mother-in-law, whom are both strong and smart women. We chose the name Juliana because I loved it and it seemed to fit her after she was born. I probably should have named her something with real meaning, oh well. It is up to her to really give this name some meaning, non?

So it looks like my daughter is no saint (her name is not below), but at least she is a cute little troublemaker.

Is your child a saint?