Since we were spending Christmas with my husband’s family, I wanted to know how his sister handles gifts from Pére Noël (Father Christmas aka Santa Claus).

I hope to do the same for Juliana as my parents did for me – I have such wonderful memories of growing up believing in Santa. I picture baking cookies on Christmas Eve with the kids and leaving them on the fireplace with hot chocolate for a tired Santa, as well as carrots for the reindeer. My younger sister and I used to draw maps of how we would catch him leaving us presents. One year, we hid behind the living room TV (it was kiddy-cornered, so plenty of room for us behind it) and accidentally fell asleep! I think believing in Santa is not only fun for kids, but great for stretching their imaginations.

My husband talked to his sister and found out that they don’t do anything special for Pére Noël. In fact, their 3 year old doesn’t believe in him. This puts a damper in my plans for my daughter, especially since we’ll be spending every other Christmas with them. I only hope their son doesn’t tell Juliana (whether accidentally or intentionally) the truth. I want Pére Noël to stick around in our family for quite some time.

It’s tradition in my husband’s family to open gifts on the evening of Christmas Eve. They have a large family dinner and exchange gifts at this time. We were supposed to spend Christmas at my sister-in-law’s house in Brittany, but our plans changed when my doctor said the 3 hour drive after arriving in Normandy from Provence was too much while pregnant (with days after traveling from Provence). Instead, Christmas was held at my sister-in-law’s mother-in-law’s house (15 minutes away). We only took one present for Juliana to open, and left the rest for Christmas day when her cousin wouldn’t be there.

One thing refreshing about his family is gift giving is not a large, stressful event. It is common to give scarves, hats, handmade stuff, and small items. Kids are not spoiled with a hundred expensive gifts from their parents. Instead, they only receive a few non-extravagant gifts. We decided to give Juliana two gifts from us and three from Pére Noël. We’ll never buy her more than one large gift. I hope to create traditions for our kids, where gifts aren’t the main focus. 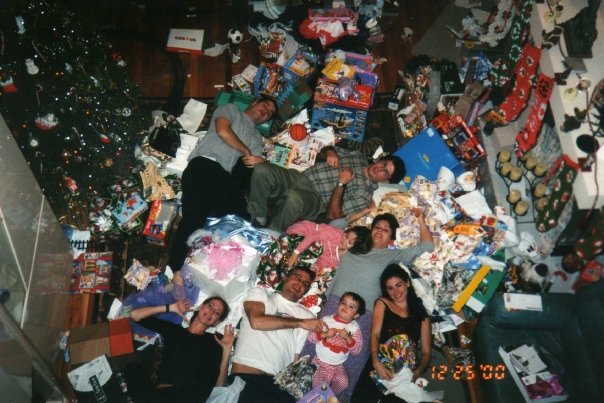 Family Christmas in Florida back in 2000. Yes, that’s me in the lower right corner.

I remember waking up to see our living room completely covered  by brightly wrapped boxes, and being overwhelmed by receiving all the gifts I wanted (except for a horse, somehow, Santa always forgot!). My parents enjoyed watching our faces as we opened each carefully chosen gift, and dreaded opening their credit card statement later. My parents wanted us to have everything they couldn’t have when they were young. And now, I want my daughter to have everything I had. It’s so tempting to spoil her with a hundred gifts… I want to give her everything she could possibly want.

If we start off by spoiling her with a ton of gifts, I can’t imagine what it would be like when she is older and the gifts she wants are more expensive. With my parents, I knew each year we would receive only one big gift. If I put five expensive gifts on my wishlist, I knew I would not get everything and I was never disappointed… after 5 years of no horse in the backyard, I learned how to deal with disappointment (and I still occasionally add it to my wishlist).

There’s so much pressure now for parents to give their kids the newest, coolest toys and gadgets. You don’t want your kid to be the only one of his or her friends to be without a new cell phone, laptop, or other item in demand. You want your kid to fit in. It seems like Christmas is becoming larger and larger in the US. I heard about what some children of my friend and family received and I’m in absolute awe. I’m not sure if the pressure is the same here in France, as I only know how my husband’s family handles this holiday.

It was another fantastic Christmas here in France. I hope you also had a happy holiday and I wish you the best in 2013. Happy New Year!!!