And yes… it’s a fixer-upper! There’s a funny story behind this. My husband and I decided we would move near Avignon so we could live closer to the TGV (train). This would make traveling to see his family much easier. Our son is due on June 19th (French due date), then we were planning to visit family in Normandy in September, and then my family in Florida in November. We thought it would be best to move near Avignon around February 2014 – after all our trips.

Our babysitter qualified to become an assistant maternelle, so we visited her home. My husband was impressed with the size her house and wished we could have more space sooner, rather than later. Since we love Banon, we decided to stay around here for a couple more years before moving near Avignon. Why rush? So we immediately went to the real estate office out of curiosity to see if there are any rentals available. The realtor said he didn’t have a house the size we were looking for but told us he had a crazy idea for us – there’s a house for sale that we may be interested in.

The picture of the house looked terrible and it was located in a small village of about 200 people, 5 minutes away. We love our life in Banon, being able to walk into town and having everything there. We scheduled a viewing of the house, but then cancelled it a few days later. Why waste everyone’s time?

My husband found a large apartment for rent in the center of town, and was cheaper than our house. Even though we loved having a yard, we thought that living there could help us save money so we could buy a house sooner. We called the woman who listed the house on leboncoin.fr, however, she said no one was home for us to go see it. We got the address and went to look at the outside. A few minutes later, the man who lived there came home and offered us a tour. We were disappointed. It was dark, old, and the cat was using the shower as a litter box.

Since we were out and Juliana was being an angel, we decided to drive by the house that was for sale. My husband called the realtor and got the address. The house looked huge outside, and in much better shape than we expected. We decided to walk around the garden and the neighborhood to get a feel for the area. As we peeped into the windows, we noticed one of the doors was unlocked! Okay, I know we shouldn’t have, but we went for a little tour of the interior (been unoccupied for 6 months). That’s when it hit us… WOW! We could get this house for XXX euros (I’ll let you in on the price later).

We then walked around the neighborhood and began chatting with one of the neighbors. She invited in for orange juice and we talked about the village, the house, and the previous owners (we love gossip!). She is a retired French teacher (not a language teacher), and was so sweet! I can picture spending many afternoons chatting with her. She has been living in this village for over 50 years and loves it. After we left, we noticed kids playing in yards and people conversing with each other in the streets. The neighborhood truly felt friendly and active.

Our minds reeled out of control at the possibility of owning this house. We had enough money to put a good down payment on it and do some renovations. Excitement pumped through my veins because I truly fell in love with the house. It has four bedrooms (two upstairs, two downstairs), one bathroom, fireplace in the living room, and lots of potential. The garden has a large greenhouse, cabin for the kids to play in, and a very good sized yard – not too large for us to take care of, but not too small either. The kids will have plenty of room to stretch their legs. Plus, there is a bottom level that we can convert into 2 more bedrooms, a family room, and a second bathroom (it’s already hooked-up with electricity, water, and plumbing for a toilet).

A couple days later, we met with the realtor again to discuss the process of buying the house. We decided to wait to place an offer until we had some artisans stop by and give us estimates of work that needs to be done. I was expecting to be told we’d need a new roof, updated plumbing, and new wiring for electricity. Mais, non! All is in excellent condition. However, we may need to update the electricity in the future if we start plugging in too many electrical devices.

We wrote a list of things we would want done before moving in and received quotes. We found out it would all cost us about 10,000 euros, plus we would need about 6,000 euros for furnishing the house and buying kitchen appliances. We’ve only lived in furnished apartments and houses while in France, so we need just about everything. This was all very do-able. Next step, going to the bank.

My husband printed out all his reports from the accountant, plus other documents to verify income. He organized everything into a folder so it would be very easy for the person at the bank to go through. It was time well spent because the man was thoroughly impressed! He couldn’t give us the official okay to this loan because he only handled employees of companies, not self-employed (he had to hand over our file to a coworker). However, he said based on what he saw, we would qualify.

Next step, return to the realtor and put in our offer in writing. We were so nervous! Buying this house felt so right, but of course, we were wondering if we were rushing too fast into this. We had only found out about this house 2 weeks earlier, and before this, we weren’t even considering buying a house anytime soon. But we bit the bullet and did it. Our neighbors even went with my husband to the house and they all told us it was a great deal and to jump on it. The realtor said he would call the owner of the house after lunch and it could take up to a week to receive a response.

The realtor called us later that afternoon and told us the owner accepted our offer, however, he needed to discuss it with his wife. All night long, we worried about a possible rejection. The house was on the market for 2.5 years (both real estate agencies never advertised it online – not even on leboncoin.fr)… at the beginning, it was going for almost twice our offer. Our offer was 16,000 euros lower than it’s current price.  However, the owner is desperate to sell because for the past 6 months he’s been living out of the country and needed to get it sold. The next morning, the realtor called us with the excellent news. Our offer was accepted.

Next step… the owner needed to decide to come here or assign someone the power of attorney. He immediately assigned someone the power to act in his behalf and mailed proof of his identity to the notaire. After about a week, the notaire contacted my husband to start the process. We are to meet with her Tuesday afternoon to sign the compromis de vente and give her our 5% downpayment. After that, it takes two to three months to close on the house. We’ll know our closing date about 2 weeks in advance.

We’ve been to the house several times in the past few weeks. I’ve taken measurements and photographs of all the rooms so I can get started on designing a new kitchen and figuring out costs of different tiles for the floors. Plus, I will be building pantry doors for the kitchen (previous owner ripped them out since they were painted with lead paint), shelves, and other things. We’ve met the neighbors on several occasions and were very nice and welcoming.

I’ll keep you all updated as we go through the process of buying the house. I’ll also need your advice on certain things! I can’t believe it… we’re buying and renovating a house in France. This year is going to be full of adventure… from giving birth to a son to setting up our new home.

I’ll give you a tour of the house in my next post. Please don’t laugh too hard… it needs lots of refreshing!

Buying or Selling a House in France? There’s... 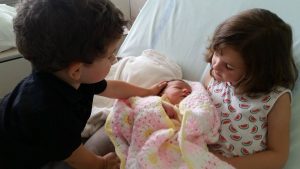 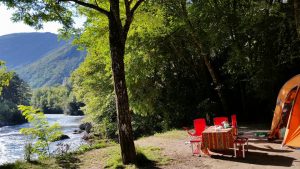