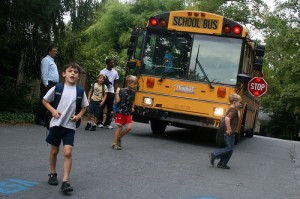 In the USA, most kids experience the daily routine of rushing out each morning to catch the yellow bus to school. Then as we get into high school, you lean against the window dreaming of your first car. In France, you will not see those yellow school buses, or any school buses for that matter.

If parents do not live close to the school then they have a choice of either driving or sending the child on the public bus or tram. In Bordeaux, it was very common to see young children in the morning either alone or with a guardian taking public transportation to get to school.  I personally got very nervous at seeing such young kids on the tram alone and could not imagine sending my little girl off that way. However, traffic is terrible downtown, so if those parents live far then I guess I could understand. Even if I took the public bus with my youngin’, it is very crowded in the mornings and afternoon that she will be more likely to catch a cold or the most recent bug going around.

Now that I am living 1 min away from a school in the northern countryside, I see parents walking kids and the older ones riding bikes. We are only going to be living here for one year before moving to the south of France, but I know when it comes time for her to go to school we will be living in a small village again. I enjoy watching the kids as they chatter endlessly with their parents each morning as they pass my kitchen window by on the way to school and giving them excited updates on their way home. I think that it is a great way to start and end any day.

When I moved to Montreal, my French husband saw his first yellow bus and took a photograph since it was something he had only seen in American movies. I guess the same will be true for our little daughter. She will never know the awkwardness as you try to find a seat, running to catch it as you see it whiz by and gossiping with your friends who are on the same route. Goodbye yellow school bus!

In the USA, most kids experience the daily routine of rushing out each morning to catch the yellow bus to school. Then as we get into high school, it becomes even more and more unpopular as you lean against the window wishing you could get a car. In France, you will not see those yellow school buses, or any school buses for that matter.