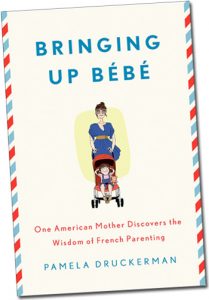 When I was pregnant in France, I scoured the Internet to read everything I could about parenting in France. I really wanted a book to tell me what I could expect or the differences between France and the USA – but I could not find anything. My older sister and mother both heard about this book, Bringing Up Bebe, from the news recently and rushed to tell me about it. I purchased it on my Kindle and I devoured it in only 3 days.

Pamela Druckerman is a journalist from the US, husband is from the UK, and they are living in France. When they had their first child, she discovered that her daughter was acting much differently than children the same age. She was intrigued and investigated the differences between American and French parenting styles. She made observations and then interviewed professionals and read studies. She lets the reader know that most of her information comes from middle class French mothers in a particular section of Paris.

We know that mothers in a small town parent differently than those raised in Manhattan. Yet, there are certain values that Americans hold no matter where they live. Parents will teach their children how to behave based on these values. The author is trying to uncover the values that the French pass on to their children and how they do it. She provides you with her personal experiences and lets you know what she found in her research. She lets you inside conversations she has had with her husband, French friends, American friends and professionals in various fields.

I found this book useful as an American mother raising a family in France. It discusses the schedule she will be expected to follow, foods she should be eating, and what is considered polite. Many of these things are natural for French mothers because it was how they were raised. I am at an advantage since I have a French husband who tells me when I do something out of the norm here.  It also gave me some reasons to be nervous, such as how at school all the kids had to draw the exact picture (lack of creativity and imagination). Her daughter also used to come home and speak to her using French commands because that is all she heard all day at school. Being good and knowing the rules are fine, but I want her imagination to allowed to run wild.

Bringing Up Baby is marketed in the US as a parenting guide for raising well behaved children. I am not sure if parents in the US can apply everything from this book. For instance, if all the other kids get snacks on the playground, it will be hard to tell your child he must wait until 4pm. Other tips like nudging your baby on a schedule or doing “the pause,” could be helpful. I have been nudging my daughter on a schedule since reading this book and have had excellent results. We have always done “the pause,” but I was reminded that I should do it even in the middle of the night if she awakes instead of immediately trying to feed her.

I laughed several times because we shared many of the same experiences. Since my daughter is too young to start eating solid foods or go to school, this book provides insight on what to expect. Of course, there will be differences in the southern French countryside than in Paris. She discusses how her daughter was becoming a little French girl and her emotions about it. I never really thought about how when Juliana goes to school, it will influence her. Now I feel a little more prepared.

When reading this book, you need to keep in mind that some of the things she says may only be true with her group of middle-class Parisian friends. For instance, no one can disagree that saying “bonjour” when entering a room is expected. The author says that children must always greet adults by saying “bonjour” or else they are considered brought up badly, outcasting the child socially. Even if the consequences may vary by region, the parenting tip is helpful. Teaching Juliana to say “hi,” is natural for me, but I will have to resist the urge and teach her to say “bonjour.” It makes sense.

Also, she had some unkind things to say about how children are raised in the USA. Not all children in the US are unruly, wake up throughout the night or not know how to eat properly; just like not all French children are well mannered, sleep all night and eat like mini adults. There was a lot of stereotyping, which is bound to happen in books like this.

The Kindle version of this book on Amazon was $12.99 USD and I do not regret this purchase. I plan on reading it a second time because I read too fast and want to make sure I did not miss anything. I recommend this book if you are expecting a baby or moving to France with children. If you already have children in France but are not married to someone French, this book can also give you some insider tips. If you are parenting in the US then this book is an interesting read to gain some different tips that you may not have received in other parenting books there.

In case you read scary reviews by others, “the pause,” is not the same thing as letting your baby cry to sleep. I have read several negative reviews for this book because of this confusion. When babies are between sleep cycles, they sometimes make noises. My daughter did it again last night while we were watching a movie. I heard a loud cry (1 to 2 seconds) and then silence, I peeked in the room to a few minutes later make sure she was okay and found her sound asleep. The pause is not about listening to your baby cry for 5 to 10 minutes before comforting her. It is about pausing a moment to tell the difference between being fully awake or making noises between sleep cycles. If you go in while she is between sleep cycles, you risk waking her and getting her used to waking up during this time.

Have you read the book? Please let me know your thoughts.

France to Reduce Prescribing Newer Birth Control P...
Financial Assistance for Childcare in France
What Do You Do When Your Child is Smacked by a Nou...
French Public Bathroom Instructions for Women ...