We don’t have stairs in our house, only outside on the balcony. The stairs leading down from the balcony doesn’t allow for a normal barrier, so we had to purchase one with 5 sides so we could wrap it in an L shape (BabyDan barrière de sécuritie Flex 5 – we love it!). Last time we visited my mother-in-law, Juliana was learning to crawl, so the stairs weren’t a safety hazard. This time, we weren’t so lucky.

Juliana on the night before her fall.

Juliana learned to walk by herself only a few days before arriving in Normandy. On Christmas morning while we were making orange juice (and right before opening gifts), Juliana climbed up 3 stairs. As soon as my husband and I turned around and saw her (stairs were about 6 feet from us), it was too late. She landed headfirst onto the tile floor.

I tried comforting her in my arms while my husband called the emergency line 15 to talk to a doctor for advice. My mother-in-law (retired nurse) said it was nothing but a minor bump on her head, she would be okay. However, we’re new parents and so we decided to take the doctor’s advice of going to the emergency room. Juliana was wailing for 10 minutes and the bump on her head was getting larger – even with the ice.

The hospital is less than 15 minutes away from my mother-in-law’s house. My heart almost stopped when I saw Juliana sleeping in her car seat (she faces the rear of the car, so I couldn’t see her while we were driving). I immediately nudged her shoulder and she woke up. She was happy to get out of the car and go into her stroller, as if it was a trip to the park.

There were only 3 people in line ahead of us, and one person allowed us to skip her. She didn’t have a child with her, only some forms in her hand – so maybe she was only there to ask question. It was very sweet of her to let us go ahead. My husband and I were doing our best to be calm, talking positively about how good Juliana was and how she was acting normal. We kept repeating to each other that we were sure she was fine.

We were immediately taken in to see the nurse, and then an intern came into see us. He examined Juliana and said it was possible she would have to stay a couple hours for observation, however, he thought it wasn’t likely. She was acting normal and didn’t vomit anytime after the fall. She had a mean bump on her head, however, it was smaller.

The doctor came into see us next. She also examined Juliana with the intern standing behind her shoulder. She told us Juliana was okay and it was good of us to bring her – she said any time a fall involves a baby’s head, we should bring her to a hospital. She advised us to wake up Juliana every 3 hours at night. If she doesn’t wake up easily, we would need to bring her in. She said most likely, we will not have to bring her in. It was only to check she didn’t get a rare condition (sorry, I can’t remember the name!). 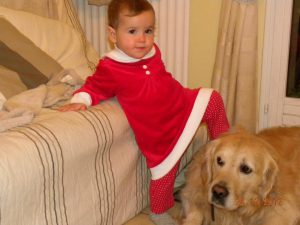 All in all, I’m glad we went to the emergency room. The nurse, intern, and doctor were wonderful! They were professional, nice, and patient. During the examination, the intern and doctor listened to Juliana’s protests. If they did something Juliana didn’t like, they altered their approach so Juliana would remain happy.

One thing I love about this large public hospital in Caen (CHU) is it has a division for children. If there is an emergency with your child, you take him to this emergency room for children – filled with equipment and medical personnel specialized for kids. We took Juliana to this hospital to have her hips examined when she was an infant and I was impressed by their x-ray machine. Unlike the nearby private hospital, this hospital’s x-ray machine was setup to keep kids in the correct position.