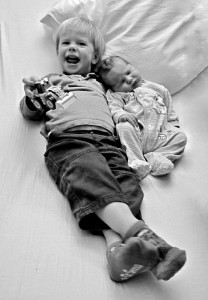 1. Tell me a little about yourself.

My name is Liene. Two years ago, when my oldest son was 6 months old, our family relocated to Clermont-Ferrand with my husband’s company. Although I’m originally from the United States, both my husband and I speak Latvian, and now are making our home here in central France. Not even one year after our move we found out we were pregnant with our second.

2. Where did you choose to give birth in France?

In Clermont-Ferrand there are two main options, the public hospital Estaing and the private Clinique Chataigneraie. We chose the clinic.

3. Why did you decide to give birth in this location?

Since our insurance coverage was the same at both, we chose the Clinique after speaking to other expats who had given birth recently, and based on its location. The Clinique also has its own laboratory on site for bloodwork and urinalysis, so convenience played a large factor in the decision. Since my English language skills are very basic it was also important to find an obstetrician who had some knowledge of the English language.

4. What were you doing when you began labor?

With my first pregnancy (US) we were pressured into inducing as the baby was predicted to be on the large side and we were rapidly approaching 42 weeks, so I never experienced the beginning of labor. This time, contractions started on a Friday night, waking me up at about 4am. I wrote them off as Braxton-Hicks because I was in denial; my mother was scheduled to arrive from the US on Sunday, and the baby wouldn’t dare come before grandmother arrived! So, on Saturday I insisted on going grocery shopping so that the house would be stocked for her visit, and when I couldn’t sleep during the night due to the contractions, I convinced myself I still had a day or two. It was 7am on Sunday morning when my water broke and after throwing up for a second time when I finally realized this was it, and that we needed to phone a friend to come take care of the our son and figure out how to pick up my mom from the airport.

5. Tell us about your experience giving birth in France?

By the time my friend arrived to care for the oldest, I was zoning out during the contractions. They still weren’t very regular, but I was running out of steam after two sleepless nights and wasn’t handling the pain as well. The short car ride was as miserable as I had feared, I couldn’t sit and I threw up about halfway there. Upon arriving at the Clinique, the midwife looked at me like she was ready to send me home, but after being examined I was admitted, even though I was not dilated nor had the baby dropped. This was probably due to the combination of my water having broken, the previous Cesarean and the vomiting, but I was relieved.

When I found out I wasn’t dilated I became very discouraged, as I felt like I had been laboring for a while and should at least have started dilation. After being induced with my first, I lasted 10 hours without pain medication and during this time only dilated 1.5cm, so I knew that without sleep I would need all the energy I could get for what looked to be a long labor. After discussing it with my husband I requested an epidural (even though I had hoped to get by without one), and concentrated on trying to breathe through the increasingly painful contractions. The hour before and after the epidural was the worst, as I felt the contractions were at a peak but the labor wasn’t progressing and the epidural wasn’t working, therefore I might be facing another Cesarean.

Once the anesthesiologist came (11:00am) and inserted the epidural, he had to return to up the dosage three times before the contractions became bearable. It was very hard dealing with the pain on my back (once the epidural was in, that was it for moving around and bouncing on the labor ball), so luckily when it finally kicked in I got about an hour of rest. I had somewhat quickly dilated to about 4-6cm during this time, and when the midwife checked me around noon, I was 10cm! Elated because my body was making progress despite the epidural I was still weary of the C-section as the baby had not dropped, and after discussing this with the midwife she helped me roll over on my side. I believe she called it “guaranteed to produce results”. I was drifting off despite the contractions kicking up a notch, and when the doctor who would be doing the delivery came in at 1pm I didn’t think there would be a baby anytime soon. Imagine my surprise when she announced that I was ready to push! I was assisted once more onto my back, and suddenly found myself pushing for the first time in my life.

After two hours of really wanting the epidural and not having relief now I was dismayed that I couldn’t feel my legs, therefore I didn’t know if I was pushing, if the labor was progressing, what was going on. The doctor and midwife quickly corrected me, they let me know I was doing a good job and after 8 to 10 contractions the head was out. With the next contraction the doctor had me reach down and grab the baby, lifting him onto my stomach. A boy. A big boy, 10lb 7oz.

I was in complete awe of the quick progression of events – of the fact that I had managed to successfully VBAC, of this little guy on my chest – and don’t remember exactly the following sequence of events. At some point my husband went off with the baby to get him cleaned up and measured while I was being fixed up (small tear) and the doctor and midwife proceeded to joke with me: about men, babies, labor, I don’t know but it was all in French and it was all funny. I also learned that the OB I had been seeing for my prenatal check-ups had talked to all the other docs on call about my determination to have a natural birth. The doctor who delivered seemed impressed by the desire to VBAC, with the size of the baby, and with my absolute lack of French. During our stay the midwives and nurses often came to our room, to get a peek at the big baby and the tall American lady.

The official time of birth was 1:45pm, which was the precise moment my mother’s plane landed in Clermont. A friend of ours picked her up the airport with a sign with her name on it: her first time in France and her daughter wasn’t there to greet her!

6. What was your most memorable moment?

Getting the epidural was difficult. The contractions made it near-impossible to sit still per the anesthesiologist’s instructions, and the sitting position didn’t help matters much. As I was squeezing my husband’s hand I noticed he was turning grey and looking funny. I told him to sit down on the chair I was using to prop my legs, but he couldn’t manage to sit down. Luckily the midwife and anesthesiologist noticed, pushed me back down so I wouldn’t fall and caught him just before he completely fainted. A brief rest on the floor brought him around and with a bit of fruit juice he perked right back up, but I discovered how much having him at my side helped and how little he can tolerate the sight of a long needle.

7. Is there anything you would do differently if having another baby in France?

There isn’t a thing. My only wish is that if we are blessed with another baby, I can give birth in France again and do not have to repeat the experience in the US.

8. How was your experience different than giving birth in your home country (if you are a foreigner)?

Many say that birth is very medicalized here in France. Compared to the UK it might be, but I found it less so than in the United States. Because of the liability issues, my feeling was that every decision my US doctor made was not for my health but to protect herself from legal action. By the time my son was born I had lost every last bit of trust in her, the prenatal care I was receiving and the hospital. Instead of the 42 week 10lb baby I was told I would have, I delivered a baby under 9lbs that the nurses remarked on as looking more around 39 weeks.

In France my doctor spent extra time at each appointment ensuring I understood everything and putting my mind at ease about giving birth in a foreign country. I never once felt that my health or that of the baby was being compromised in the name of insurance, and the care of the midwives, doctors, pediatricians and hospital staff was courteous, kind and helpful at all times. I was blessed with a healthy baby, no complications, and a birthing experience that surpassed all my expectations, and for this I am grateful.