Good children in France eat three meals a day and have one gôuter (snack). If you feed your child outside of those times, you will probably get some stares or advice from others around you. Last week I had a doctor appointment in the early morning and was running late, so Juliana didn’t get a chance to finish her breakfast. We took the rest with us and when she started getting cranky during the appointment, I whipped it out and began feeding. My doctor made a comment about her eating. Luckily, I had a good excuse… it wasn’t snacking, she was finishing her breakfast because mommy was irresponsible and slept in. There is one exception to kids having a gôuter outside 4 pm… if your child is clutching  a baguette.

Next time you go to the grocery store, take a look at kids in shopping carts. Most likely, there will be a good number of kids holding onto a piece of a baguette. My French sister-in-law told me that she used to give her son so much bread that he blew up (he was a bit chunky as a baby, eats less bread now). When I came back down from visiting my in-laws, I took my daughter grocery shopping at the supermarché and noticed my sister-in-law is not the only one who knows about the magic of the baguette.

When a child gets fussy at the grocery store, many French women make a bee-line to the bread section, tear off a piece of a baguette and hand it to their little mischievous child. Of course, you put the rest of the baguette in your cart and pay for it when you leave. I have to admit, I now take part of this honored tradition! My daughter absolutely loves baguettes. As soon she clutches a piece in her hands, she giggles. Ah oui, she goes from uncontrollable tears to giggling in a split second! As soon as she runs out and gets fussy again, I tear off another piece. It’s a good thing baguettes are so long. Oh, but if you tear off a piece and eat some yourself, you will get judged. I thought since she was eating, it gave me a free pass. Nope! I received many critical looks. The only time I was not judged was when I was noticeably pregnant. Oh, those were the days!

This tactic also works very well at restaurants. Ask for the bread upon sitting down. If your baby gets fussy before the meal arrives, you’ve got something to distract her. Works every time!

Another reason to LOVE baguettes! 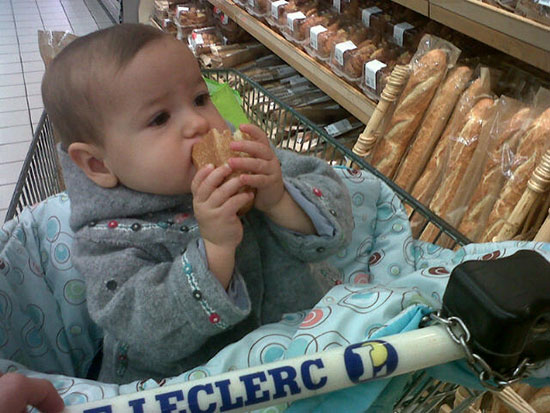